At 1750 On the 11th August, Briggs Marine responded to an emergency call from WRS Services regarding the MSC BHAVYA, a large container ship, sailing under the flag of Liberia, with a carrying capacity of 5018 TEU. Her current draught is reported to be 9.7 meters, length overall (LOA) is 294.14 meters and width is 32.3 meters.

After an emergency repair request on the vessel, Briggs’ dive trailer was promptly mobilised and arrived in Liverpool early on the 12th August. Following its arrival, all equipment was loaded onto Briggs vessel, MV Forth Hunter, in preparation for the dive job to take place.

In the early hours on the 13th August, Pilot Launch ‘Petrel of Liverpool’ operated by Briggs Marine, departed the Port of Liverpool and headed out to Liverpool Bar boarding stations. The Duty Pilot was boarded using a combination ladder on the starboard side of the MCS BHAVYA, in a position due west of the boarding area. With the Pilot safety onboard, the vessel proceeded inbound to a berth at Liverpool 2 Container Terminal where she was secured alongside by Briggs Marine’s Liverpool Mooring Services.

Briggs Local Contracts Manager, Neil Reid and Dive Supervisor, Craig Harris, met the Chief Engineering Officer onboard MSC BHAVYA to ensure all permits and isolations were in place prior to diving operations.

Briggs Marine’s commercial dive team locked out of the Liverpool Dock System at 1100 on the 13th August, made their way to Liverpool 2 Container Terminal and secured alongside MSC BHAVAYA. Due to tidal restrictions, diving operations began at 1700 and the team successfully completed the repair works by 1900. The crew onboard MV Forth Hunter assisted the dive team with the fitting of a bung to the external aperture of an overboard discharge pipe, allowing the vessels engineers to carry out the replacement of the internal discharge valve onboard.

Diving Operations where conducted in conjunction with vessel cargo operations, resulting in no loss of productivity; allowing the vessel to maintain its planned sailing time onwards to Canada.

The short notice request to attend the vessel was carried out safely and successfully; showcasing Briggs Marine’s fully integrated service which is continuously expanding in Liverpool. This successful repair underlines our strength of capability when working together as one team; in this instance involving our Liverpool Pilot Boats, Liverpool Mooring Services, our Dive Team, our vessel, MV Forth Hunter and a highly skilled workforce of 19 in total.

We would also like to thank WRS Services and Peel Ports for their assistance which enabled us to get the job done in an efficient manner. 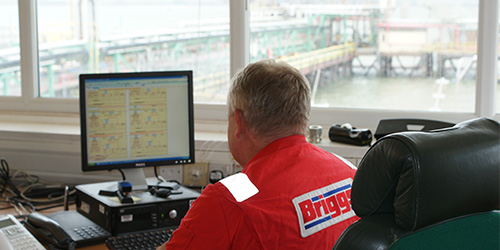